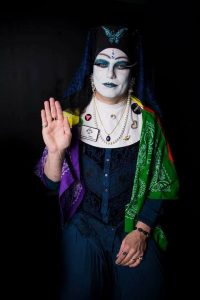 Sister Broomhilde von Bratwurst was discovered fully formed at the bottom of a barrel of festering lager in a small hamlet in Bavaria. After the shocked German townspeople hosed her down and gave her a good scrubbing, they took her in as their own and educated her in the ways of polka, euchre, and cheese curds. She flourished in the alpine air and soon became a virtuoso on the concertina. A long courtship with the Earl of Cabbage went sour when he learned she had poor yodeling skills. The Earl eloped with the harlot Lady Mustard and poor Broomhilde was left a spinster. Devastated and embittered, she turned to the nunnery for solace. It was there in those hallowed halls that she found her new calling to spread joy and stamp out guilt! Lured by fables of fantastic beer and fresh sausage, Broomhilde transplanted to the Midwest where she continues to carry out her mission of mirth and mayhem.